5 Reasons Why Home Buying Is Similar To Dating

Buying a home takes long term commitment, can be trying on your emotions and is easily one of the most exhilarating times in your life…if it’s the right one!  In other words, it’s very similar to dating!  In the article below, Yuqing Pan with Realtor.com actually examines how home buying can be similar to dating and we found it to be quite entertaining, enjoy the read!

There’s something desperately missing in your life. You decide to do something about it now, and so you sign up for one of a slew of websites that aim to help yearning hearts like yours find a match. You flip through profiles late at night, and certain phrases or well-lit photos make your heart skip a beat. And when you think you may have found “The One,” you figure it’s time to make an assessment in person.

It could be either.

Neither buying your dream home nor finding true love comes without effort. But just how deep does the comparison go? To find out, we pulled together some data about both—the emotional highs and devastating lows that people experience on their journeys. You be the judge. 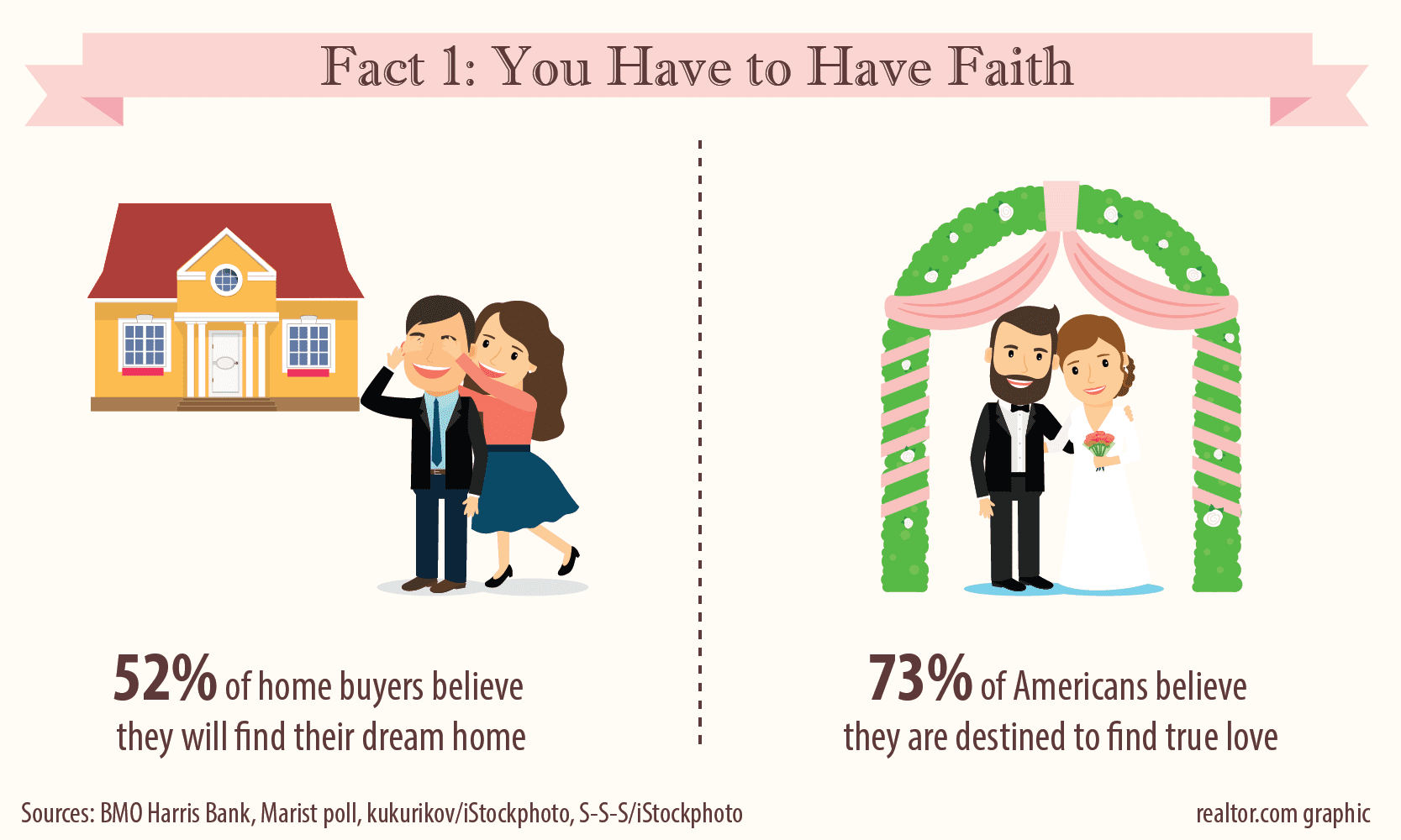 Before you even begin to look for homes, you’ve probably heard all about rising home prices, bidding wars, stringent mortgage standards, and other rough-and-tumble tales (especially if you’re a regular reader of realtor.com®!). If you feel a little disheartened, you’re not alone. A little over half of home buyers (52%) believe they will find their dream home in their price range, while 48% say it’s impossible, according to a 2014 survey by BMO Harris Bank.

People are way more optimistic when it comes to love. A 2011 Marist poll showed that 73% of Americans believe that they are destined to find their soul mate.

But while some say that positive thinking is the key to success, thinking alone won’t get you there. It’s all about the numbers, baby! Which leads us to… 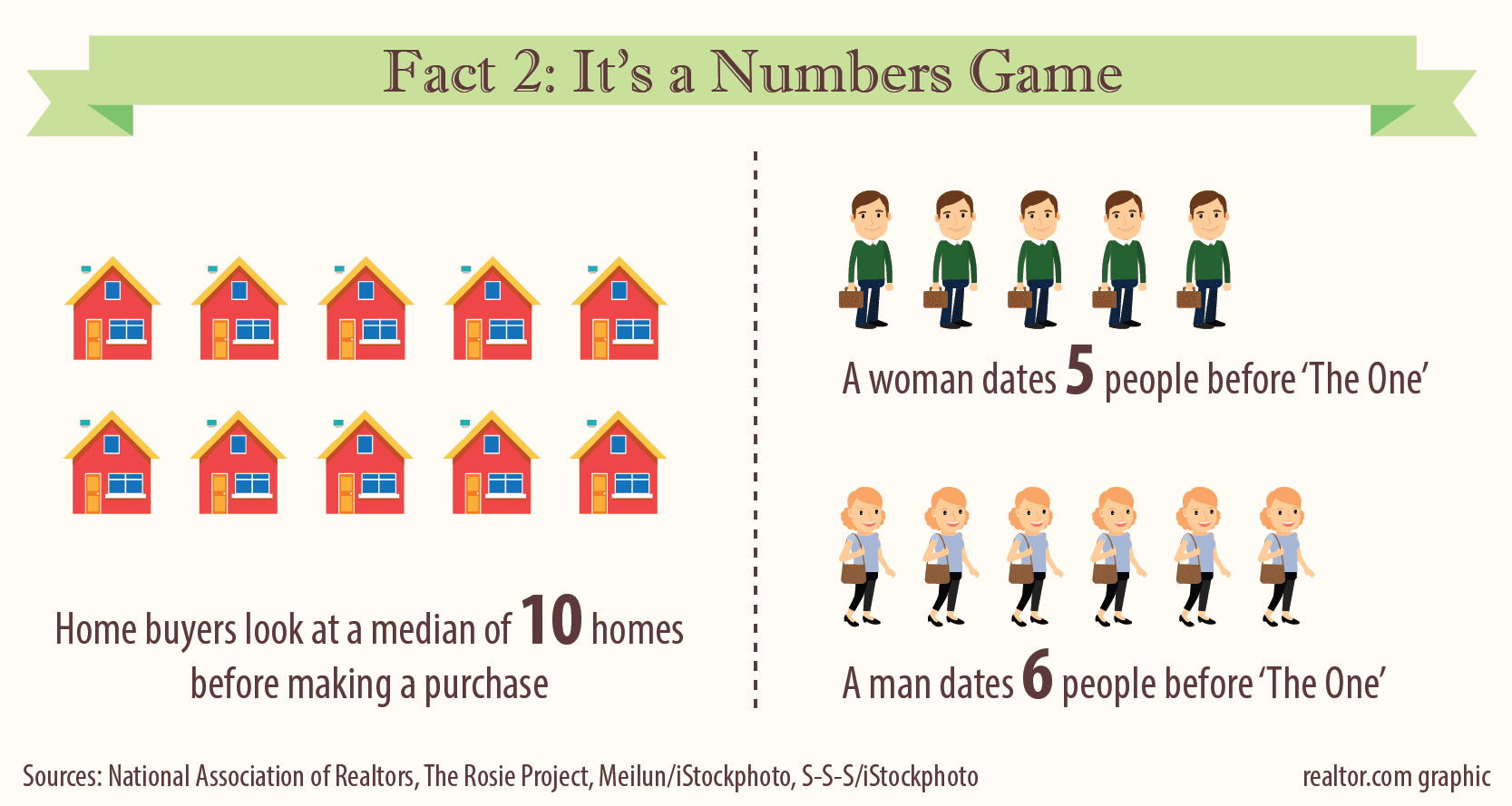 Life would be so much simpler if the first house you ever visited, or the first person you ever kissed, was The One—but you don’t live in a fairy tale. (Do you? If so, please contact us!)

Home buyers, be prepared for the long haul: Buyers typically search for 10 weeks and look at 10 homes before purchasing, according to the National Association of Realtors®.

Love doesn’t come easily, either. According to a British study, an average adult woman will have five relationships, four disaster dates, 15 kisses with different men, and two heartbreaks before meeting The one.

What about the guys? The “player” stereotype doesn’t really hold up: The average man will have six relationships and be stood up twice before finding his perfect half. 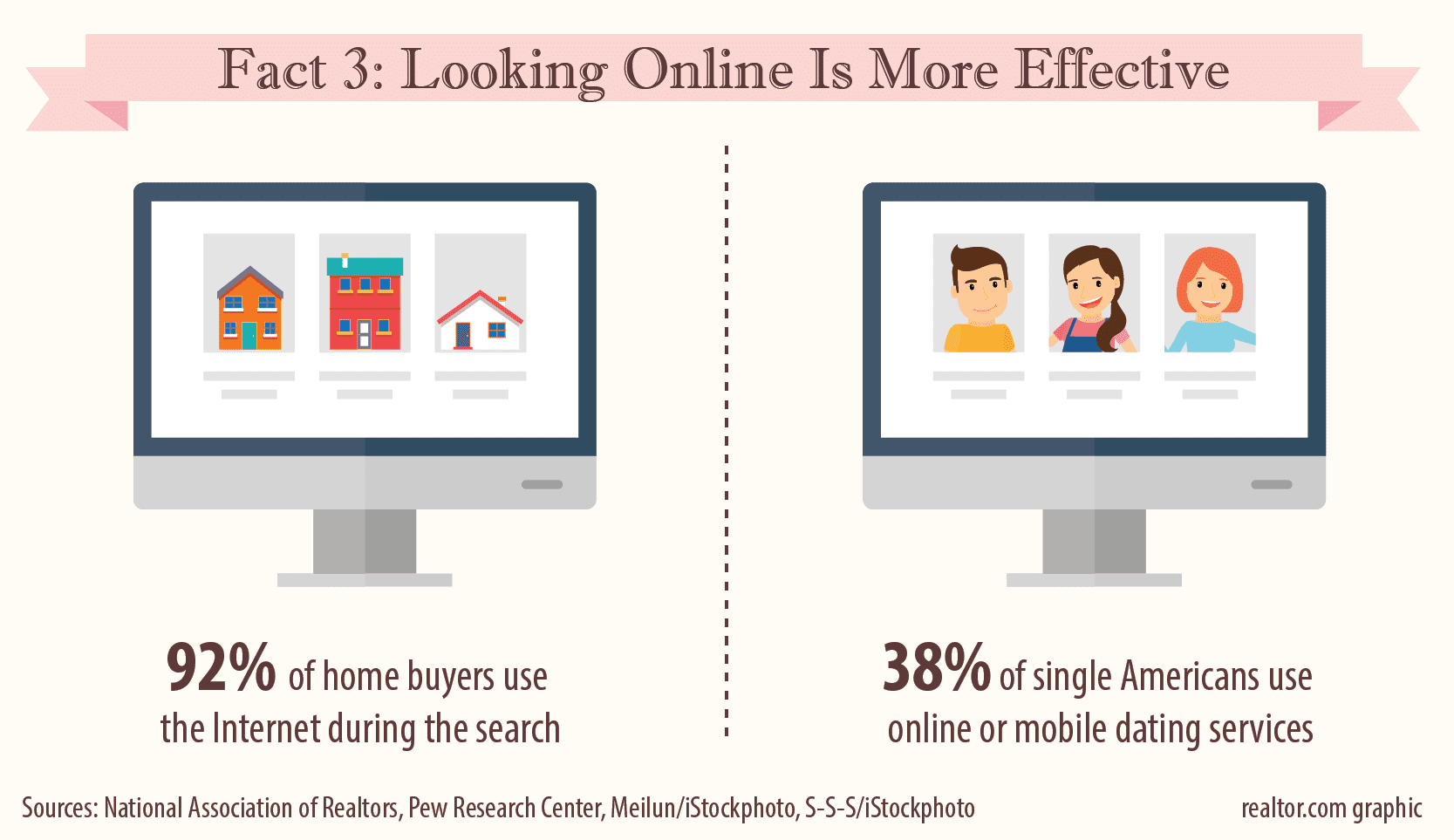 The Internet has made finding a home much easier than ever. The NAR report shows 92% of home buyers use the Internet at some point during their search. Online websites (such as, ahem, realtor.com) are deemed a very useful information source by 82% of buyers, while not quite as many (but still a high number: 78%) say the same about their flesh-and-blood real estate agent.

Although there’s been a sea change in the way that people view online dating (the idea of finding love on the Internet once fell somewhere on the scale between dubious and pathetic), people aren’t quite as quick to jump online to seek a mate as they are to look for a house.

A 2013 Pew Research Center survey showed 38% of Americans who were single and actively looking for a partner had used online dating sites or mobile dating apps. But among those who have, the majority say dating sites and apps help people find a better romantic match because of the wide range of potential partners they can access.

About half (52%) of Americans say they believe in love at first sight, reveals a Gallup poll. Another study shows it takes only 12 minutes for people on a first date to decide if they’re interested in the other person. As soon as people sit down, they will be immediately judged on their smile (64%), whether they make eye contact (58%), and their tone of voice (25%). 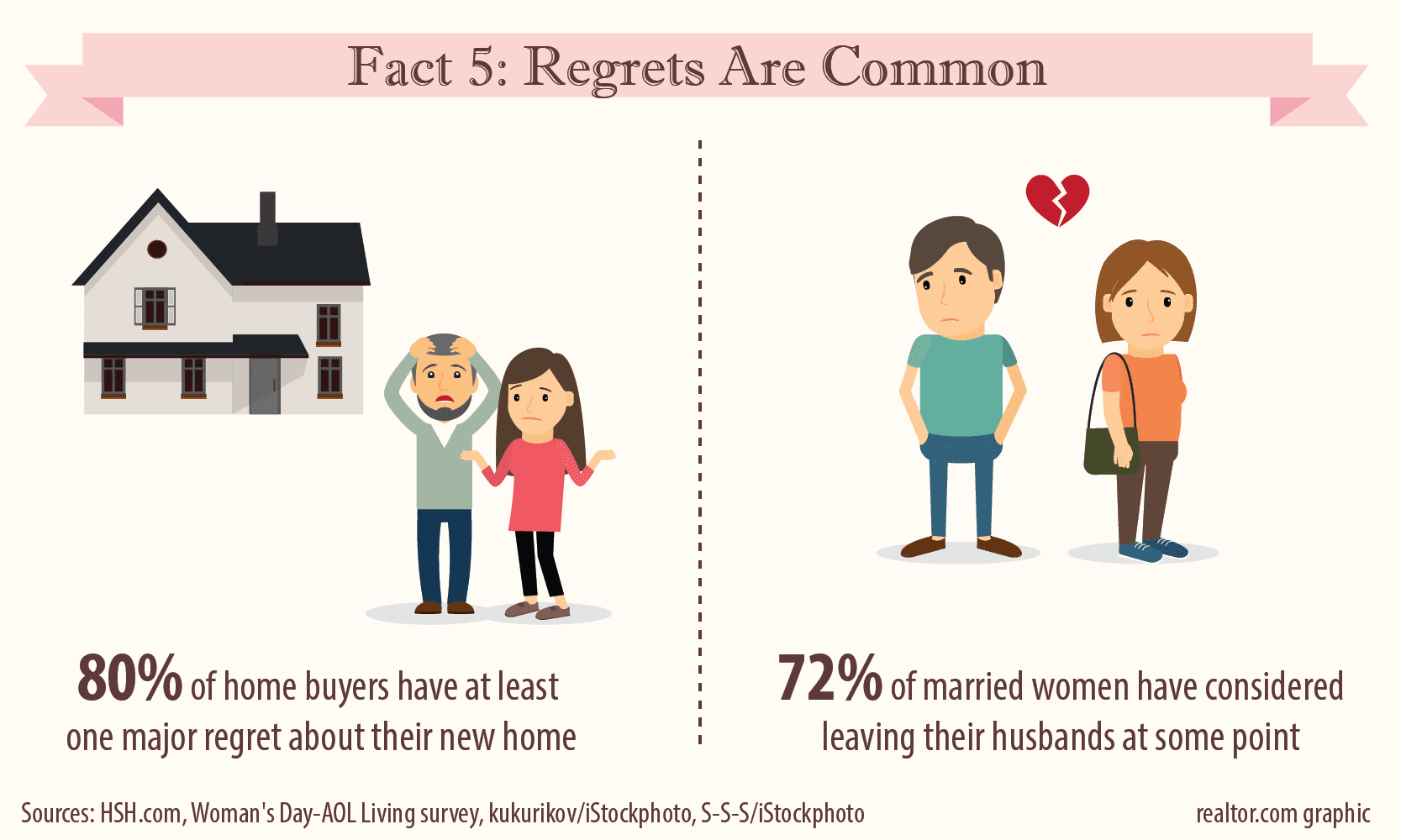 Just like the sexy-hot European sports car you bought which turns out to get 4.5 miles per gallon and not even have room for a suitcase in its trunk, the house that you spend months buying may turn out to be a bummer. About 80% of home buyers have at least one major regret about their new home, says an HSH.com survey. Some top complaints include being too small, not having enough storage space, neighbors, and school system.

What about people? Well, the person that you pledge to share your life with can also turn out to be Mr. (or Mrs.) Wrong. A whopping 72% of married women have considered leaving their husband at some point, and more than half (57%) sometimes regret marrying him, according to a poll by Woman’s Day and AOL Living. Relax, that doesn’t mean all of them are getting a divorce. Despite the regrets, 71% still expect to be married to their spouse for the rest of their lives.

The reality, of course, is that neither homes nor relationships are ever truly perfect. But if you really work at understanding what you want and what you need, and taking the time to assess a variety of options, you’re likely to find a pretty good fit. Maybe even one that will improve with time.

Written by James Suarez on March 1, 2016. Posted in Stories