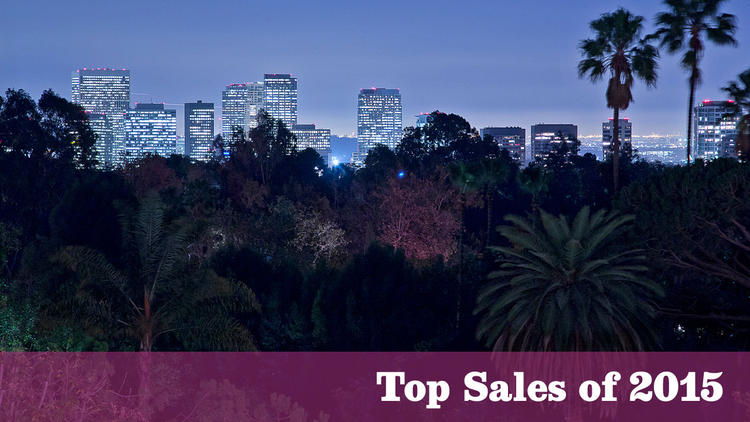 Original story can be found here

Another year of nine-figure listings dominated real estate headlines and, to an extent, our imaginations in 2015. But despite sticker prices intended to induce shock and astonishment, we failed to see a $100-million home sale recorded in Los Angeles this year.

Instead, many of the year’s most expensive deals provided mystery and intrigue — sales occurring off-market under the cover of LLCs, blind trusts and blanket secrecy. Here are the top 10 transactions, listed from highest to lowest sale price.

Set on 90 feet of private beach, the compound includes a 2,500-square-foot main house  on a bluff. Two guest houses, a cottage near the sand, a swimming pool and a tennis court make up the grounds. 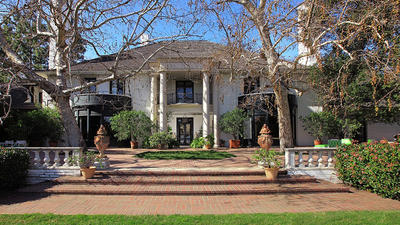 The Singleton House, a Holmby Hills estate estate built for Teledyne cofounder Henry Singleton, sold in April for slightly under $60 million. The 15,520-square-foot home, one of the last major works of noted architect Wallace Neff, opens to a grand entry with an oval foyer. Elaborate formal areas, a wood-paneled study/library, 10 bedrooms and 12.5 bathrooms are within the Southern Colonial-style house. Gated grounds of nearly 8 acres contain expansive lawns, patios, gardens and a wide motor court.

An oceanfront compound in Malibu’s Encinal Bluffs area fetched $50.5 million in an off-market exchange involving a pair of blind trusts. While details are scant, tax records indicate show multiple structures including a four-bedroom main house and two guest cottages. A tennis court and a swimming pool are within grounds of about six acres.

Guess Jeans cofounder Maurice Marciano cut a wide swath in August, selling his sprawling 2.7-acre estate to hotel and casino magnate Steve Wynn for $47,851,500 in an off-market deal. Built in 2004, the 19,299-square-foot contemporary-style mansion has eight bedrooms and 13 bathrooms, according to tax records. A large motor court, tiered patios, large expanses of lawn and a swimming pool and spa sit within the hedged and gated grounds. 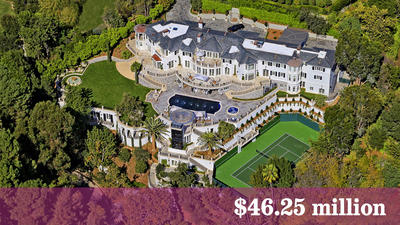 Liongate, the Bel-Air estate once home to singer Kenny Rogers, sold for $46.25 million to philanthropists James and Eleanor Randall. Originally built in 1938, the mansion was rebuilt and expanded in 2013 and has 11 bedrooms and 15 bathrooms in nearly 24,000 square feet of interiors. Among amenities are three living rooms, a 12-seat theater and a master suite spanning 3,000 square feet. A glass elevator leads to a formal ballroom. A newly built guesthouse, a tennis court, two fountains and a swimming pool make up the 1.62-acre grounds.

In another off-market sale in Malibu, investment banker and politician Jack Ryan sold a compound to a nondescript limited liability company in March for $44 million. The blufftop estate on just under three acres includes an unfinished Traditional-style main house and a pool house totaling 12 bedrooms and 12 bathrooms in about 13,000 square feet. Two beachfront cottages below the bluff are also included in the property. 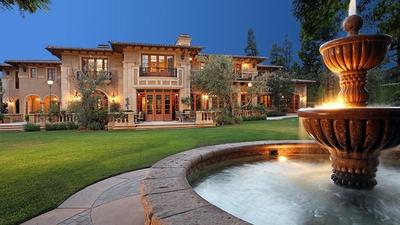 The onetime 90210 address of Detroit Pistons owner Tom Gores came to market in September for $43.5 million and ultimately sold for $36 million — the most expensive sale of a publicly listed home in Beverly Hills in 2015, public records show. Set behind a gated drive, the 1.35-acre estate centers on a contemporary Italian villa designed by architect Kevin Clark and completed in 2000. A two-bedroom guesthouse, a swimming pool and spa, fountains and formal gardens make up the grounds. The 14,422 square feet of refined living space features inlaid marble and walnut floors, coffered ceilings, custom millwork and seven antique fireplaces. Grand living and dining rooms, a wood-paneled office/library, a home theater and a wine cellar and tasting room are among the common areas. There are eight bedrooms and 11 bathrooms in all.

In June, the longtime estate of late radio and television personality Art Linkletter quietly changed hands in an off-market deal for $34.5 million. Mortgage documents later revealed the buyer to be Canadian billionaire and Edmonton Oilers owner Daryl Katz. The nearly five-acre property previously included a Midcentury Modern-style house designed by Philmer J. Ellerbroek that has since been razed. Views center on the surrounding canyons, Century City and downtown L.A. 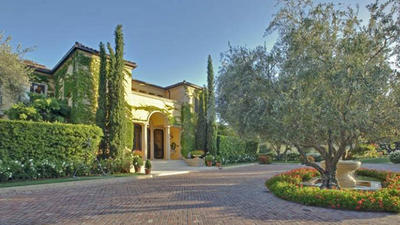 Following on the heels of brother Maurice’s sale in Beverly Hills, Guess cofounder Armand Marciano sold his Beverly Crest-area estate outside the Multiple Listing Service for $32.67 million. Guess Inc. cofounder Armand Marciano sold his three-acre estate in the Beverly Crest area for $36.27 million. Built in 2001, the grand Mediterranean-style mansion has 10 bedrooms, 10 full bathrooms and 12 powder rooms/bathrooms in nearly 25,000 square feet of living space. Three floors of living, designed for large-scale entertaining, include a professional screening room, a wine cellar, a game room and an elevator. A mosaic-tiled swimming pool, a pool-/guesthouse, an outdoor/indoor kitchen with a pizza oven, a tennis court, orchards and a pavilion make up the grounds. The property previously came to market at $63 million in 2012 and at $54.5 million two years ago, records show, but included more acreage at the time.